Subfertility/Infertility Assessment in the Medical Laboratory

Literature concerning a reduced reproductive health show a confusing high number of correlation with many factors such as epigenetics, vitamin deficiencies and malnutrition, obesity and lifestyle in general, monogenic disorders, immunologic disorders such as autoimmune disorders, advanced age and many more.

Around 15%  of couples experience 'subfertility' during the first year of intercourse. In addition, reproductive failures such as implantation failures and repeated miscarriages, but also malformation and fetal growth restriction must be considered. Evidence based laboratory diagnostics are needed to support successful outcomes in these couples.

This article focuses on several algorithms which can be used to further assess subfertility/infertility. As an example, malnutrition is prevalent in developing but also in developed countries. Metabolic pathways and cellular physiological functions rely on healthy nutrition. A prominent pathway is the one-carbon methylation cycle requiring folate, vitamin B12, vitamin B6 and an intact methylenetetrahydrofolate reductase (MTHFR) enzyme. Deficiencies or imbalances might result in hyperhomocysteinemia, which has been associated with reproductive failures, miscarriages, congenital malformation and fetal growth restriction.

Further examples will focus on autoimmune disorders and on recent genetic approaches.

Pubmed (www.ncbi.nlm.nih.gov/pubmed/) shows 39000 articles when searching for the causes of subfertility or infertility. The probably most accurate definition of infertility and subfertility is provided by Gnoth et al. (2005) as well as by Habbema et al. (2004).

Definition and Prevalence of Subfertility and Infertility

What are the main causes of subfertility and infertility?

Male and female factors are most probably equally distributed.

Monogenic factors are more likely to be involved in infertility, however genetic factors contribute to unclear subfertility as well.

Although male factors account for approximately 50% of all infertility, the mechanisms underlying their origin are unknown. Currently, clinicians rely primarily on semen analyses to predict male reproductive potential and chart treatment success. Even when invasive procedures are performed, the causes of male factor infertility frequently remain elusive (Kovac et al., 2013). Recent estimates indicate that genetic abnormalities cause 15-30% of male factor infertility (Ferlin et al., 2007). For example, spermatogenesis involves the aggregated action of up to 2300 genes, any of which, could, potentially, provide targets for diagnostic tests of male factor infertility (Hotaling and Carrell, 2014). The same holds true for the unclear female factors. Genes involved in ovarian and endometrial reproductive functional interaction are expected > 5000.

What are the Best Practical Approaches for the Clinician in order to Assess Subfertility/Infertility?

There are many causes in both, female and male which can be diagnosed and treated without a major involvement of the laboratory (undescended testicles, diabetes, varicoceles, lifestyle, uterine or cervical abnormalities, tumors, tube damage or blockage, endometriosis etc.).

The basic blood screen with full blood count and differential will allow to pre-assess possible hemoglobinopathies, iron or vitamin B12 and/or folate deficiencies. However, this might be difficult in carriers of hemoglobinopathies, as indices could be masked. We recommend to test for Ferritin and Vitamin B12 in every woman/man with possible subfertility/infertility (Forges et al., 2007). In this context it is of interest that a positive correlation of seminal methylcobalamin (Vitamin B12) with sperm concentration has been described (Boxmeer et al., 2007).

In addition the blood differential allows a pre-assessment of a possible infectious disorder. CRP, high vaginal and urethral swabs for culture and for STDs are mandatory tests in order to detect possible infections.

In all women with subfertility/infertility, Anti-Muellerian Hormone (AMH) testing is of central importance. This marker has a high potential in assessing ovarian response, menopause prediction and PCOS. It is lowered in premature ovarian insufficiency or failure (POF/POI), in autoimmune disorders and in contraceptive supplementation (for review see Leader and Baker, 2014). As with the AMH in women, semen analysis in men (according to WHO 5th edition) is considered the next step. Furthermore, Inhibin B levels are higher in men with apparently normal fertility than in those with sub/ infertility and abnormal spermatogenesis. Serum Inhibin B should be used in combination with FSH, as a more sensitive marker of spermatogenesis than FSH alone (Grunewald et al., 2013). However, the optimal level of inhibin B to assess male infertility has not been established.

Karyotyping in both, husband and wife in order to exclude balanced translocations and other abnormalities should be done next. In addition, screening of Y-deletions and CFTR mutations is recommended in cases of oligospermia/azoospermia (Stahl and Schlegel, 2012). Sperm aneuploidy testing using FISH should be considered as well, especially if the sperm show abnormal morphology, such as round-headed sperm syndrome or micro- and macrocephaly (Hotaling and Carrell, 2014). In order to exclude autoimmune processes and coagulation disorders, I recommend to perform ANA screening, TPO and TG antibody testing as well as Factor II and V mutation screening, PT/INR and aPTT, Protein C, S and Antithrombin testing.

Sperm DNA fragmenation testing should be considered next if all previous tests and examination were normal. In case of suspected repeated implantation failures cellular and humoral tests can be performed.

If the cause is still not established, genetic panel testing (>100 genes) or even the whole exome sequencing can be recommended. Due to newer technologies (high throughput DNA sequencing, next generation sequencing) allowing fast sequencing of thousands of genes (the human exome consists out of 30.000.000 basepairs and around 180.000 exons) the cost is not the limiting factor anymore (see figures 1-3).

As outlined in the abstract, lifestyle and nutrition as major factors for obesity, diabetes, malnutrition despite overweight, might play an underestimated role in subfertility. There is known relationship between body weight and reproductive hormones. For example, obesity is associated with increased sperm DNA damage (Chavarro et al., 2010).

The methylation cycle (requiring Folate, Vitamin B6, B12, MTHFR) is of central importance for many physiological processes. There is a growing body of evidence demonstrating a relationship between Folate and other B Vitamin deficiencies,   hyperhomocysteinemia and gonadal abnormalities, such as altered spermatogenesis and impaired ovarian reserve, as well as male and female infertility. However, the exact mechanisms underlying these phenomena still need to be further investigated (Forges et al., 2007).

In the UAE, we experience a very high number of Vitamin D deficient patients. Repeated correlation - however conflicting - of Vitamin D deficiency and reduced pregnancy outcomes have been described (Polyzos et al., 2014). Vitamin B12 deficiency, often combined with iron deficiency is found frequently in all UAE ethnicities as well. To which extent malnutrition and Vitamin deficiencies play an important role in reproductive health is controversially discussed in the literature, however diseases, environmental factors and nutrition have an important impact on epigenetics. Epigenetic modifications including DNA methylation, histone acetylation and RNA interference are involved in functional changes in pregnancy (Altmaee et al., 2014).

The Medical Laboratory can support the Clinicians in unclear cases of subfertility/infertility. Newer developments in Genetics allow a broader and more detailed assessment of unresolved cases.

Figure 2: From the Nucleus to the Genes and Proteins 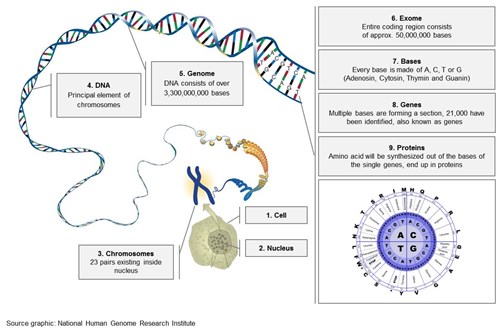 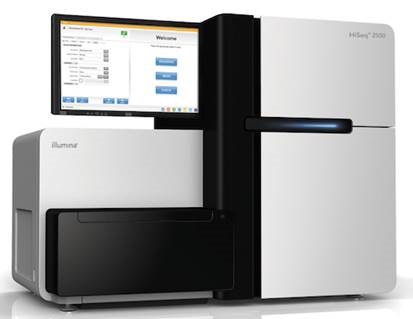 Accredited according to DIN EN ISO 15189